Releases for the week of November 23:

*just so you know, I wasn't really compelled to write anything last week because the releases were pretty much limited to The Twilight Saga: New Moon and Planet 51 and the Sandra Bullock weepy, The Blind Side... so here are some picks that look a lot more promising. 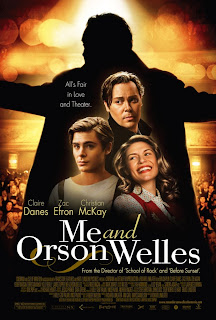 Graduating from the stage of High School Musicals, Efron plays a young thespian looking for a break on the Great White Way, and fins himself landed a role in "Julius Caesar" directed by a young Orson Welles. McKay, a relative unknown, is a ringer for the blustery genius Orson. Linklater's hot'n'cold career has
thus far produced such offerings as A Scanner Darkly, Before Sunrise/Sunset, The School of Rock & Bad News Bears ('05). Judge accordingly. 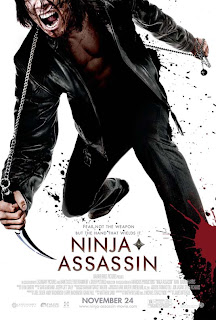 Ninja Assassin: Dir. James McTeigue; with Korean superstar Rain, Rick Yune, Naomie Harris (Tia Dalma from 'Pirates' films), Ben Miles.
With production by The Wachowski Brothers (the Matrix trilogy, V for Vendetta),
this story of feuding ninja clans and an orphaned boy all grow up and looking for vengeance is certain to feature plentiful slow-mo, physics defying fight sequences and minimal character development. If you're looking for 99 minutes of brain-in-neutral eye candy, you have a lot to be thankful for this week. 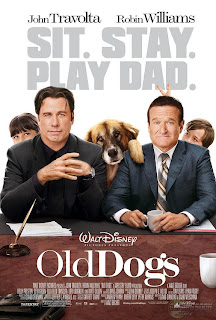 Old Dogs: Dir. Walt Becker; John Travolta, Robin Williams, Kelly Preston, Ella Blue Travolta, Lori Loughlin, Seth Green, with Matt Dillon, Justin Long (the Mac guy) and the final appearance of Bernie Mac.
From the director of Wild Hogs and Van Wilder, Travolta and Williams play career guys with no immediate plans on settling down with kids, when one of them is informed by his ex-wife that he does in fact have a pair 7-year-old twins.
Shenanigans and hi jinks abound. The trailer has been providing some LOL moments so this family-friendly heart warmer is sure to be safe entertainment for your kids and your parents. After the stinkers RV and License To Wed, it's obvious Williams really does need a little help from some friends.
*This is also a family project for the Travoltas, with John and wife Kelly Preton, and daughter Ella. 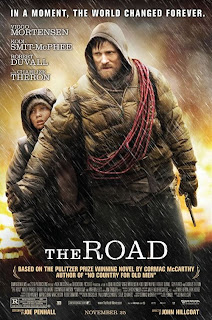 The Road: Dir. John Hillcoat; Viggo Mortensen, Kodi Smit-McPhee, Charlize Theron, Robert Duvall, Guy Pearce, and Canadian Molly Parker.
Based on the novel by Cormac McCarthy (All The Pretty Horses, No Country for Old Men, Blood Meridian) a father and son travels the American wasteland after a presumably global ecological catastrophe leaves most of the population dead and the environment in ruins. The story follows their trek south, looking for safe refuge from the deadly winter ahead. The Road screened to rave revues at the 2009 Toronto International Film Festival, and director Hillcoat is virtually unheard of in North America, having directed a handful of films in his native Australia, as well as several music video for the likes of Depeche Mode, Siouxsie and the Banshees, and Nick Cave. 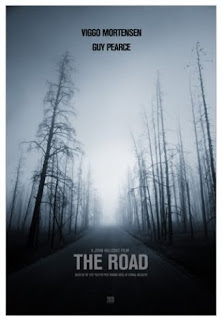 *Early teaser poster for The Road 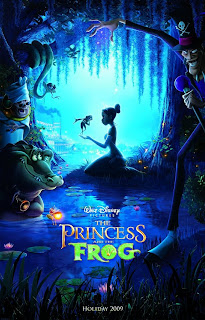 The Princess & The Frog: Dir. Ron Clements & John Musker; Anika Noni Rose, Keith David, Jenifer Lewis, Ritchie Montgomery, Bruno Campos, Oprah Winfrey
In a return to traditional hand-drawn cell animation, Disney brings back a couple of guys who know how to do it right - Directors Clements and Musker have collaborated on a number of Disney classics since The Great Mouse Detective,
including The Little Mermaid and Aladdin. This time out the story is set in 1920's New Orleans, in the heart of the jazz age. A young woman sets out to establish her own business, and a little night magic causes her to cross paths with a talking frog. If you've ever seen one Disney movie, you know how the story unfold from there - songs, someone who embodies evil with totality, more talking animals and a fairy tale ending. Great for the kids but with a jazzy soundtrack, should appease parents and adult animation enthusiasts with a fresh, jazzy soundtrack. Oh yeah... songs by Randy Newman... take that for what you will. 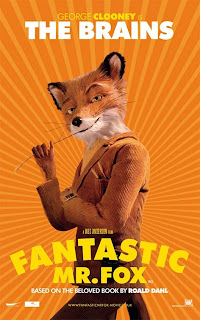 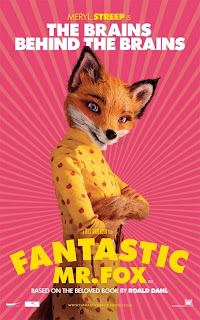 Fantastic Mr. Fox: Dir. Wes Anderson; George Clooney, Meryl Streep, Jason Schwartzman, Bill Murray, Owen Wilson, Wallace Wolodarsky, Eric Chase Anderson.
All the usual Anderson suspects are here, but now they're represented by hand-made stop-motion puppets covered in real hair and clothe costumes. In this retelling of Roald Dahl's beloved classic story, Clooney's the voice behind the Fox, an established mammal looking to provide for his family, primarily by raiding the stores of three nearby farmers who are in turn on to his dirty deeds and plan to do him harm. Anderson has blended the 39 year old story with his 'could only be a soap opera' style to make the trials of the Fox family and friends a little more metropolitan and give the story a little more weight and beef up the running time. It'll be like Life Aquatic mashed-up with Team America without the fart jokes. Excellent. 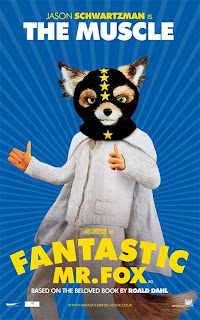 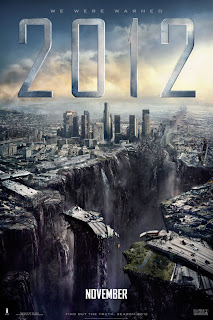 2012: Roland Emmerich's most recent take on destroying the world, this time with John Cusack is the likeable everyman leading us through this thrill-ride that blows-'em-up real good. Based on the idea of the end of the world as we know it coinciding with the end of the Mayan calendar, all hell breaks loose and all but the most politically incendiary landmarks around the world are erased of the face of the world, like a big reset button was pushed. Emmerich's blown up lots of stuff in The Day After Tomorrow, Independence Day and Godzilla ('98). Cusack seems to be stepping into shoes normally worn by Nic Cage, but his affable nature played well in Con Air and Identity, so he'll surely add some credibility that seem like an after-thought since Will Smith or Tom Cruise weren't available. With Thandie Newton, Amanda Peet, and Oliver Platt, as well as appearances by Danny Glover and Woody Harrelson. 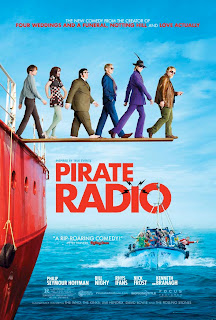 Pirate Radio: In what could be a beautiful mash-up of High Fidelity, Almost Famous and A Hard Day's Night, relentlessly hip Philip Seymour Hoffman plays dj on a ship off the coast of England in 1966. Kenneth Branagh plays a feathers-ruffled English minister who wants the ship off the air. With Bill Nighy, Rhys Ifans, Nick Frost (most familiar to North American audiences as Simon Pegg's right hand in Shawn of the Dead and Hot Fuzz)and Rhys Darby (familiar to N.A. audiences as Murray Hewitt from Flight of the Conchords). Set in an amazing era of music and re-edited since it's not-great European release, this should at least be a fun trip! 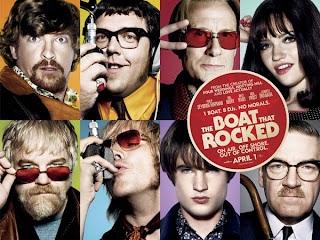 *poster from the European release
Posted by Mark L. Craighead at 8:29 PM No comments:

As Canadians, we've been for years at the mercy of the trends and times of the 'cultural' behemoth beneath us.Not to say that we haven't made a great culture of our own, especially in the arts, but for the entertainment of the masses, we flow along with the tides of the US, eh. And these pulsations of the newest and coolest aren't seen anywhere as vividly as they are in the world of cinema... and I use that term in it's loosest possible meaning. There are two times in the year that studios roll out the big guns, and big hugs,as it were. May sees the beginning of the Summer Blockbuster season - where Bruckheimer and Bay, Willis and Will Smith frolic with bullets blazing, explosions blossoming and money falling from our wallets like rain from the heavens. The Summer Blockbuster season lasts usually until the 2nd week of August at which point the movie-going public generally tries to get back to real life for a few months. In the interim, the studios trot out their Lost Dogs and Born Losers - movies that they know aren't great or even good sometimes. This wasteland is a dull, sad and sometimes unintentionally hilarious or terrifying place, but it give audiences a little bit of breathing room between the Summer Blockbuster season, when they expect every red-blooded, oxygen-breathing person with a debit card and at least one good working eye to be in those moderately comfortable theatre seats at least one night of every weekend during the summer (and maybe the odd Tuesday or Wednesday night, if you don't mind), and the next wave. But the wasteland provides a moment's solace, before the next tidal wave of awesomeness hits, around the third week of November, (just in time for the American Thanksgiving), the Holiday Blockbuster season cranks to life. Generally offering less explosive and more family-friendly fare, studios try to cash in on families flocking to the theatres once they've grown tired of each other's company.

That said, finally... here's a quick run-down of some of this years Holiday season options:

Getting an early start, a whole batch of interesting titles are being released Nov.6: 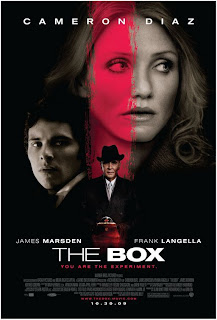 The Box - Cameron Diaz, James Marsden, Frank Langella - A family facing financial frailty finds a mysterious box on their doorstep and is placed on the stage of a very real-life and ultimately terrible reality tv show. And they'll have to do it without the help of Jeff Probst. From Richard Kelly, writer/director of Donnie Darko. (based on a story by Richard Matheson - 'I Am Legend' & 'What Dreams May Come') 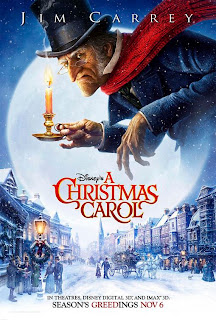 Disney's A Christmas Carol - Jim Carrey, Gary Oldman, Bob Hoskins, Colin Firth - A timeless holiday classic, dusted off and fancied up for the 3D age, it's 21st film adaptation. Carrey stars as the crotchety protagonist of this perennial redemption story, lending his mugging and elasticity to motion capture technology. Directed by Robert Zemekis - Back to The Future, The Polar Express - this animated film also features the on-screening reuniting of Cary Elwes and Robin Wright-Penn, of The Princess Bride. 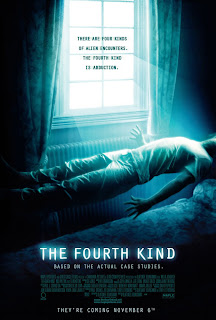 The Fourth Kind - Milla Jovovich, Elias Koteas, Will Patton - Jovovich steps away from the zombie genre for a moment (don't worry - Resident Evil-Afterlife is slated for Aug.2010) to star in this 'fact-based' ficto-docu-something.. is derived from actual case studies from a series of unexplained deaths in a remote Alaskan town. Alien abductions are always exciting fare but we've already had on Blair Witch
Redux with Paranormal Behaviour, so the studios may have been better served offering this one as a straight ahead abduction flick as opposed to fueling the 'is it live or is it memorex' debate which no one will really care about two weeks after they see this. If this was really based on irrefutable evidence of extraterrestrial misdoings, surely Robert Stack or Barbara Walters would be hosting. Nevertheless, supposed to be terrifying so if you don't get all the scares you were hoping for from A Christmas Carol, this would make a great fall-back. 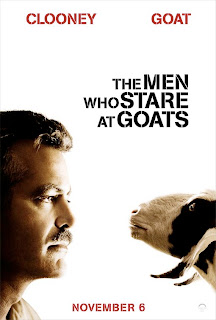 The Men Who Stare at Goats - George Clooney, Ewan McGregor, Kevin Spacey, Jeff Bridges - with a cast like this, something would have to be terribly wrong and missed by several levels of production staff for this not to be another Three Kings or a clever cross of Coen Bros and David Mamet. McGregor is a journalist looking for a story to make his name. Clooney is a weirdo claiming to be part of a secret 'special' branch of the military trained with psychic powers. When the founder of the unit disappears, Clooney's Cassady makes it his mission to find, McGregor's Bob Wilton senses either a great story or a fun road trip. With Stephen Root in the supporting cast and multiple references to Jedi's with Ewan 'Obi-Wan' McGregor in the room, this should certainly please the more off-beat cinemaphile. 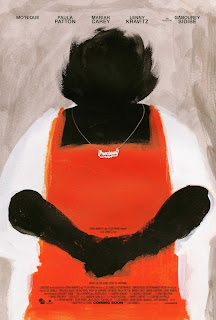 Precious - Mo'Nique, Mariah Carey, Lenny Kravitz and newcomer Gabourey Sidibe; produced by Oprah and Tyler Perry. This gritty drama has already been praised endlessly at Sundance and TIFF and may be a Little more reality than some are looking for in the holiday season, but effective performances by Sidibe and Carey make the story of a teenage girl on a long road down to nowhere ultimately offers a positive and life-affirming message. Well, of course it does, or it would have been produced by Quetin Tarantino rather than O.
Posted by Mark L. Craighead at 9:32 AM 1 comment: